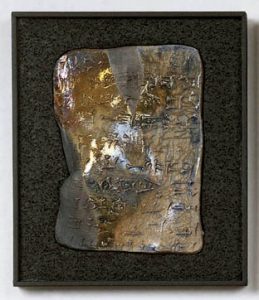 At the dawn of writing

For many years, my work has been orbiting around writing, and my desire is to pay homage to it. Writing, or more precisely, the signs that comprise it, are the matter of culture and begin with history itself. “All’alba della scrittura”(“At the Dawn of Writing”) is an homage to the invention that ferried us from prehistory to history; in particular, to the invention of the alphabet that, approximately 3,600 years ago, produced the symbol par excellence, a sound that is formed, a form that shapes thought, the thought free from its thinker. The pages from the dawn of writing are the bricks with which I constructed my “Tower of Babel.” Although the aforementioned was conceived before September 11th, today it can be considered as an allusion provoked by the attack on New York. In “Là dove scorre il pensiero” (“There Where Thought Flows”) as well, the archaic inscriptions return to symbolize human thought. This time, the pages are entangled in a “spiderweb” of metal cables that represent a neuronal structure. My passion for paradox, for upheaval, for extreme elasticity, allows the elements that host thought (the neurons) to become the canvas on which thought is entangled, leaving the task of deciphering a few of the fragments to logic, method and intuition. The physical context in which thought is conceived, or rather, it’s container, becomes in turn a support structure, a skeleton, contained in a work that pays homage to scientific research. If, on the one hand, in my research, writing is lifted up as an icon of language, on the other, the meaning of the written text becomes a metaphor of the culture that expressed it and of the context to which the work itself refers. In “Che la memoria di ciò che è stato si fonda con la materia che ospita il nostro pensiero” (“That the Memory of That Which Was Fuses With the Matter That Hosts Our Thought”), a work on the Shoah that uses the queue as a horrifying method of extermination and annihilation of human nature, the biblical text in Hebrew forms the texture of human figures, their body, their identity. The more recent works, including “Riflessioni sulla convivenza” (“Reflections on Co-Habitation”) or “Nei sistemi complessi la reversibilità è un lusso” (“In Complex Systems, Reversibility is a Luxury”), focused on love relationships, carry words of love imprinted onto their surface, which come from the “Cantico dei Cantici” (“Song of Songs”) or a poem by Paul Eluard. It is not simple to identify whether the idea or the image first appears in the genesis of my work. A vision initially emerges on the threshold of my conscience, a general and somewhat confused image. I attribute a first interpretation to this image, placing it in relation to emotions, ideas and words that accompany or are evoked by it. It is precisely this work of deciphering the meaning that produces, flowingly, a precise and coherent formal definition that leads to the creation of the work. The works “Riflessioni sulla convivenza” (“Reflections on Co- Habitation”) arise from an intricate, embracing image: the vines of ivy represent cohabitation. It can be seen and experienced as a cage or as a structure on which to construct. The empty spaces, precious elements in any relationship, are just as essential as the filled ones, allow for the permeability of the whole and thus authorize the belonging to the living world. Among the threats that over time have created a solid canvas, at times barely elastic and even suffocating, the “words” of love must find a way to emerge. That which brings us to the light along an everso- slow path, of almost vegetal growth, is the deliberation with which, during the passing of time, the spent words are substituted with other, newly formed ones, intact and precious. Which direction will the subsequent visions take? An image of levity, relative to the thought phenomenon, emerges from the cultural medium of imagination that had deep roots in my interior edifice because, as the poetess Anne Michaels writes:

We do not descend, but rise from our histories.
If cut open, memory would resemble
a cross-section of the earth’s core,
a table of geographical time.
Faces press the transparent membrane
Between conscious and genetic Knowledge