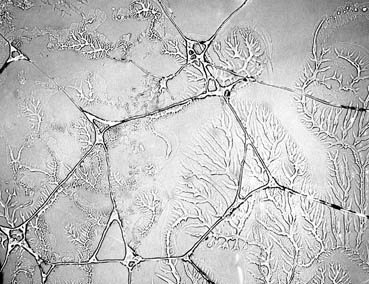 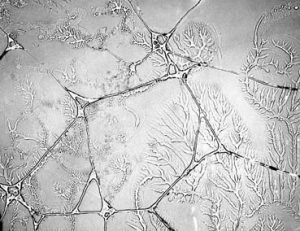 The technique called “Shadows of light” was set up in cooperation with the artist-photographer Rino Regoli, and it allowed me to delve into a subject that is very dear to me: thought. I painted invisible growing neuronal structures such that the observer can only perceive their shape and presence through their effect: their shadow. The transparent material laid on the glass behaves like a lens and, by concentrating light beams going through it, it projects, on the white background, a bright image that is precisely its shadow. Such a paradoxical experience of watching not a structure, rather the results of its presence, seems to me to be bound to hinting at human thought, mysterious subject whose effects make up most of our world. Both the learning process of new notions and the emotional/sensorial experiences produce new neuronal connections within our brain.
Thinking, therefore, is building connections, or new structures, unknown-of new shapes.
In this work, the neuronal networks develop on a branched underlying layer representing the non-neuronal cells of the nervous system (the glia). Please note that such layer reminds of Rohrsach’s stains, a tool used to investigate the unconscious, so that, as is often the case with my work, the studying method becomes itself a visual metaphor of the subject under investigation. The Rohrsach’s stains take here the role of representing the unconscious, non- acted thought, something little decipherable, primeval, dim (indistinct) but structural: the “way we are” superimposed upon the “what we are thinking or experimenting” as described by the neuronal layer.
My intention is to represent, through this visual allusion, the unavoidable simultaneous presence, in our thinking processes, of one graphically “directional” component, that is, one that has a precise and finalized direction, and one component that has to do with our unconscious thinking, inevitable weft of our interior architecture.